Bawnboy is a picturesque scenic village in West Cavan. The area is popular with anglers and walkers. Nearby lakes, Brackley and Templeport provide good coarse fishing while Brackley is also popular with bathers during the summer.

Bawnboy is immersed in heritage and culture. St. Mogue’s island in Templeport Lake was an important monastic site during the later middle ages. The island was said to be the birthplace of St Mogue, a noted early Irish saint.

The island contains early Christian monastic ruins and a graveyard. A place of pilgrimage for many centuries, the island is best viewed from the parish church of Templeport. Featuring heavily in local tradition the island and entered the realms of modern folklore when an RAF Beaufighter crashed here in 1943.

Bawnboy is home to the Jampa Ling Tibetian Buddhist residential retreat centre. Centred in a large Victorian house called Owendoon, Jampa Ling is situated in 13 acres of meadow, woodland and gardens, and borders a lake.

The name Jampa Ling means ‘place of infinite loving-kindness’. The Centre is run by a small group of Panchen Ötrul Rinpoche’s students and runs events for the general public throughout the year.

3.5 miles south of Bawnboy lies Ballymagauran castle, of which only the base survives. It was originally a tower of two stories, and was built by the Magauran family in the late 16th century.

Another building of interest in the village is the workhouse, was built in 1853. These institutions were built by the British government to give relief and assistance to the needy in Ireland. Bawnboy workhouse was built just after the Great Famine, which affected Bawnboy severely. 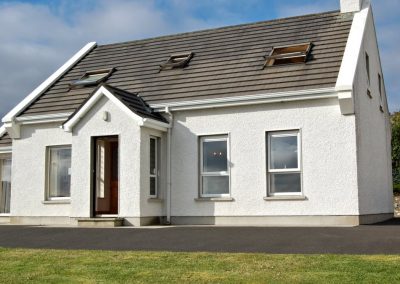